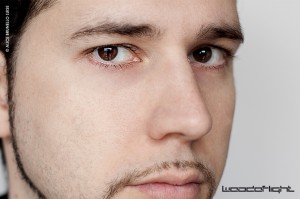 Damiano De Marchi was born in Mestre (Venice), June 19, 1983. Fascinated by bands like Metallica, Iron Maiden and Helloween, he began taking guitar lessons but after a few months he oriented towards the study of the electric bass. After attending Fancelli – Boschello Academy of Music for 3 years, he decided to continue his studies by himself in order to follow a path oriented towards progressive and rock, turning his musical tastes to bands like Dream Theater, Symphony X, Andromeda, Pain of Salvation. Afterthis, he became part of some local groups, playing at school proms and other parties. From 2003 to 2007 he collaborated actively with 0:Kelvin, a Venetian band with many different stylistic inclinations. In the winter of 2004 he was contacted by Mirco Brunello to take part in a cover band  project with poor results due to impossibility to complete the line-up.
In May 2006 he joined Wood of Light at the same time guitarist Mirco Brunello entered the line-up.