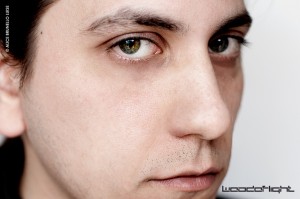 Osvaldo Indriolo was born January 17, 1985 in Treviso. When he was only six, he approached the world of music after listening to “A Kind of Magic” (Queen – 1986), which was given to his brother, strangely enough, on November 24, 1991, the date of Freddie Mercury’s death. Fascinated by the heavy sound of “Gimme The Prize”, he gradually discovered other rock bands and artists: Aerosmith, AC/DC, Guns n’Roses, Extreme, Mr. Big, Black Sabbath, Saxon, but also other more challenging bands, considering his age as Yngwie Malmsteen, Rush and Dream Theater. In parallel to this strong interest in music, he starts playing the piano and he learns some folk tunes and the famous bagatelle, “Fur Elise” exclusively “by ear”.
At the age of 14 he approached metal music, concentrating his interest almost exclusively on Dream Theater. He then began studying the piano more seriously, moved by the desire of learning the songs of the American band.
In 2004, approaching the world of synthesizers, he bought a Korg M1, not a top-level instrument at that time, but fine for cutting-edge approach this world. The same year he founded Wood of Light.
Osvaldo also plays the clarinet, an instrument inherited from his paternal grandfather, who was an orchestra musician.
Concomitantly with the publication of Feelikescaping in 2012, he was involved with Mirco Brunello in the foundation of the Avant-garde band Give Us Barabba and, two years later, they released the full-lenght “Penis Barbecue“.